Variable-rate mortgages are finally back to prime and it’s been a year in the making.

Not coincidentally, we’ve been coming across more people who are thinking about riding out a variable for the next five years.  It’s a gutsy call given future rate hike expectations, but some people are willing to take the risk.  For those people, it’s worth considering a 1-year mortgage as well.

A 1-year fixed also protects you against rates rising in the next year, should the Bank of Canada hike its overnight target before September 2010.

The risk with a 1-year is that variable rate premiums and fixed rates rise before your renewal. In 8-12 months you could theoretically face prime + 1/4% or more.  Few expect this, but anything’s possible.

Despite the risk, and given the apparent probabilities, a 1-year near prime frequently makes sense over a variable.

More About 1-years:  1-year and variable-rate mortgages are both funded in the short-term money market.  Therefore, they tend to move together over time.  This graph below shows prime rate compared to 1-year fixed rates over the last 10 years. (The 1-year rates are discounted 1/2% from posted). 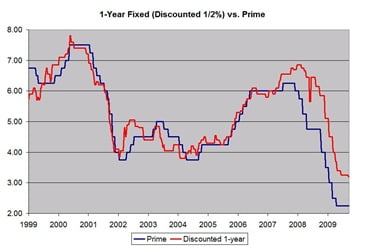 If you’re thinking of taking a variable with plans of locking in when rates rise (not recommended, for reasons we’ve discussed here before), then a 1-year convertible offers similar benefits and more.