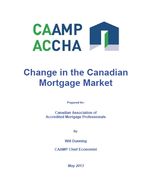 Every six months, CAAMP's mortgage market survey provides a pulse on mortgage activity. The theme of its latest report is balance. In other words, the report aims to establish the need for balancing two risks:

(a) the risk that Canadian housing overheats (which is being mitigated by tighter mortgage policies), and

(b) the risk of economic damage caused by a policy-driven housing slowdown.

"At this point, it's important to support the economic contribution that housing makes, instead of further restricting it," CAAMP president Jim Murphy said in an interview today. "The market was already slowing when the last set
of rule changes were implemented. Now the market has slowed further and we feel the changes put in place have gone far enough."

Apart from commentary on mortgage policy, report author Will Dunning shares a host of other intriguing findings. There's new data on mortgage rates, refinancing, amortization length and more. Key points are highlighted below in green, with our comments in italics.

Among those who initiated, renewed, or refinanced a mortgage since the beginning of 2012, and chose 5-year fixed rates:

For homes bought from 2012 to present…

(By comparison, a just-released CGA-Canada survey finds that "21% of mortgage holders increased the amount of mortgage payments or made lump sum contributions to pay off mortgage faster over the past year.")

Among borrowers who took out a new mortgage in 2012 or 2013 (through April), those who obtained their mortgage:

The following are CAAMP estimates on the economic impact of home building and stricter mortgage rules:

Survey Details: CAAMP notes that: "Data used in this report was obtained from various sources, including an online survey of 2,000 Canadians. Almost 60% were homeowners with mortgages and the rest were renters, homeowners without mortgages, or others who live with their families and are not responsible for mortgage payments or rents. The survey was conducted by Maritz (a national public opinion and market research firm) for CAAMP, during April 2013."

Housing Affordability Worsens, Time Needed to Save for a Down Payment Increases

Parents to the Rescue: Average Size of Gifted Down Payments Rises to $82,000